On May 6, Prince Harry surprised the world by announcing that Meghan, the Duchess of Sussex, had given birth to a bouncing baby boy, Archie Harrison Mountbatten-Windsor, in the early hours of the morning.

With his name announced and first photo call out of the way,  I thought it was time to have a sneak peek at his natal chart to see what it might be able to reveal about his personality. 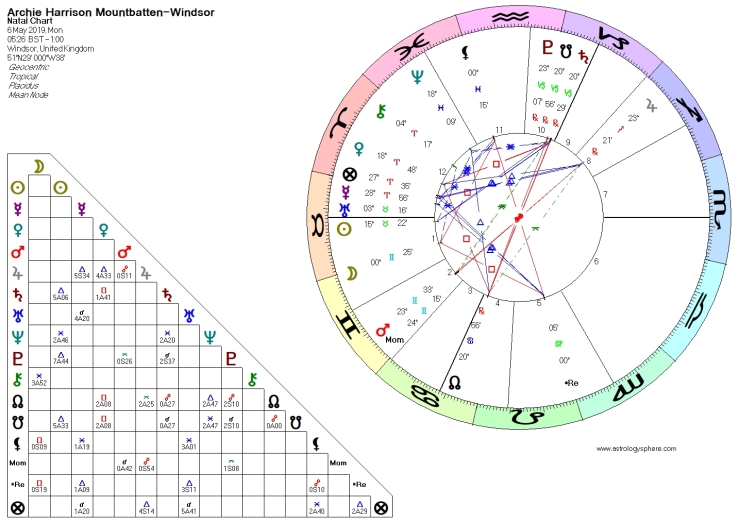 Born at 05h26 BST on 6 May 2019, Archie Harrison Windsor Mountbatten is a ‘double Taurus’  – a sign sun Taurus with the Bull rising. In this respect, he has something in common with his great-grandmother, the Queen and first cousins, Prince Louis and Princess Charlotte of Cambridge.

However, that is where the similarities end.  The main reason for this  – a stellium of planets in headstrong Aries, together with a prominent Uranus,  rising in Taurus in the 12th house. What does this mean? This child is likely to be something of a firebrand and a rebel, though perhaps not even intentionally.

One trigger point may well possibly concern his mother. Archie has natal Mars conjunct his Part of the Mother, which could suggest a fierce devotion to her. While he is likely to be very close to his mother (he has the Moon in the first house) it’s also possible that they may have quite a fiery relationship. Mars rules his 12th house, while Jupiter rules his 8th, so I suspect that this opposition is most likely to point to conflict in his close personal relationships, the template for which is, of course his relationship with his parents.

Meghan has a loose Mars-Jupiter square like Prince Phillip, which can possibly make her a little abrasive  – she may not mean to rub people up the wrong way, but her natal Mars in Cancer in the 12th may end up working against her, perhaps quite unconsciously. Mars is considered to be in fall here, and so doesn’t always work very well in this sign. As a result, I suspect that she may become moody, defensive or overly touchy from time to time, possibly taking offence or feeling slighted where no harm is meant. Alternatively, Jupiter may create an air of superiority or smugness that could possibly ruffle feathers, again without meaning to, through either through being misunderstood, triggering judgemental reactions, or possibly unconscious resistance, from others via passive-aggressive behaviour. All of which could potentially lead to unspoken tensions and power struggles or stand-offs, especially amongst family members (Cancer is the sign of family), the situation with her father and step siblings being just one example.

With all his sensitive 12th house planets, Archie may pick up on unspoken hostility towards his mother and as a result, spend a lot of time defending her against real and perceived threats and attacks from outside – a trait he may share with his uncle, Prince William, who spent a lot of time as a boy defending the reputation of his mother when she was being maligned by the establishment during the period of er separation and then divorce from Prince Charles.

A quincunx to Saturn hints at help from a concerned grandparent who may be able to help steer this young man away from exuberant outbursts and teach him to control his impulses better and channel them into constructive activities such as sport or outdoor physical activities. Otherwise, like Prince Harry, I think he may have a few troubled teenage years ahead.

As the first mixed race child to be born to a prominent member of the British royal family, I also suspect that he may become something of a curiosity, which could lead to secret resentment on his part. Uranus rising so close to his Ascendant means that his looks will always set him apart or mark him out as special, but with such a loaded 12th house, I don’t think he will enjoy the attention. Perhaps if gets some siblings, this will change, but I certainly think that, as the first child of Harry and Meghan, he is always going to represent a step change in how the royal family do things. Even the circumstances around his birth marked a change in how things have been done in recent decades.

Uranus is also conjunct Mercury, so his style of communicating may be somewhat unusual – I wonder what sort of accent he will have, given his mother’s transatlantic twang? He is also likely to be a fast learner and to have an inventive mind.

An ability to blend old and new: Saturn & Uranus

Despite this, or perhaps because of it,  Baby Sussex has a strong desire to conform and do his bit for The Firm. His prominent Saturn in Capricorn on the Midheaven means that he will have a great deal of respect for his elders and may even become a bit of a stickler for tradition. Saturn rules his 8th and 9th houses, so I think he may be drawn to the drama of ancient rites and rituals that are associated with royal duties such as the Trooping of the Colour etc.

If he can learn to get Saturn and Uranus to work together in his chart, its possible that he may be one of those rare people who can bridge the gap between heritage and modernity. Uranus rules his 11th house, so I think he may espouse charities that represent diversity. He may also be an early adopter of new technology. Friends are also likely to be one of the areas of his life where he shows his eccentric/progressive/quirky side.

For more insights into Archie of Sussex, you can read my Zodiac Child report.