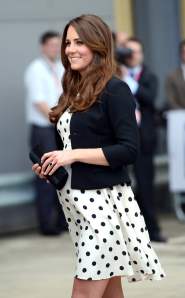 This month, many fans of the British royal family will be anxiously anticipating the arrival of Catherine and Prince William’s first child, so I thought I would break with tradition in terms of my Astro-Insights columns by looking forward at current events, rather than backwards this July, and take a closer look at the potential due date/s for the royal birth using astrology.

For thousands of years, astrologers employed in the royal courts of Europe and Mesopotamia were called upon to study the stars to look for favourable alignments that they could work into the natal horoscopes of their royal patrons, a practice which may have led to the creation of ‘official birthdays’ for the reigning monarch if the actual birth time wasn’t as auspicious. This may explain the still current custom of the British royal family to celebrate two dates for the birthday of the Queen – her actual birthday and her official birthday[i]– which falls on the second Saturday in June every year and is marked by the tribute to the office of the monarch, now a largely military ceremony, known as ‘Trooping the Colour’.[ii]

Getting back to our current focus, speculation about the exact birth date and time of the third in line to the British throne has naturally, reached fever pitch in the last few weeks, with a number of probable dates being bandied around in the media. Let’s have a look at these to see if any of them seems astronomically favourable.

Two dates that have been cited in the media as hot favourites with speculators include July the 17th and 18th. The latter date in particular seems to have become a ‘hot favourite’ with the bookmakers, and as we shall see, this may have its roots in astrological reasoning, in addition to possibly more mundane calculations about pregnancy terms etc.

The reason I say this is because at exactly around these time, a highly auspicious and rather rare grand trine involving Jupiter, Saturn and Neptune in water signs, is due to take place over the course of the 17th , 18th and 19th.

The meeting of these planets is very unusual because of the slow pace at which all three generally move. Just to give you an example, Jupiter and Saturn usually make a conjunction every 20 years, whilst Saturn and Neptune usually only come together every 33 years or so. According to Marjorie Orr, Queen Elizabeth I and our current monarch, Queen Elizabeth II, both came to power under a Saturn-Neptune conjunction[iii], so it is interesting that this royal birth happens to be taking place during the celebrations of the Queen’s 60th anniversary of her coronation on 2 June 1953.

However, what is interesting about this configuration for our purposes is that it will make very close contact to Prince William’s natal Moon in Cancer. The Moon in Cancer is, by itself, a strong marker of nurturing instincts, childbirth and parenthood, so it is possible that this astrological signature could mark the birth of his first child.

It is also likely that this experience may bring up strong memories and emotions concerning his own relationship with his mother, Diana, the late Princess of Wales. This contact, which involves a conjunction between transiting Jupiter in Cancer and William’s natal Moon at 4 degrees 57 minutes of Cancer, is due to take place at around 00h48 BST on July the 18th, and will be in play for a two-hour window, until just before 3am.

Neptune, which forms part of the major grand trine set in motion by Jupiter on the 17th and 18th, is also important natally for Prince William – not only is it rising in his chart (that is, conjunct the Ascendant) but it also happens to rule the prince’s IC, the angle most associated with parenthood, family connections and ancestral roots, which seems to reinforce the birth symbolism. So if it does symbolise his child’s birth, then it would seem as though the child will not only be deeply cherished by William and Catherine, but also play an important role within his family unit, and be an important ancestor in the royal line.

If we cast a chart for around 1am  – in the middle of this 2 hour window – we notice that the Ascendant of the chart happens to conjunct William’s natal Venus in Taurus in the 5th house of children. Could this indicate that he will have a daughter? Mars, ruler of his 5th house cusp, is also on the Descendent, within orb of his natal Sun-Moon conjunction, suggesting the start of a new presence or relationship in his life.

Although we don’t have a time of birth for Catherine, we do know that she also has the Moon in Cancer natally, so this is also an important signature for her. The presence of so many planets in Cancer, including Jupiter, which is exalted in this sign, seems to augur well for this birth. Perhaps becoming a mother will be the making of her?

So what of the 13th? This is the date reported in the media to be the Duchesses official due date given to her by her obstetrician.[iv]

Looking at the astrology of this day, it is interesting to note that Mars will ingress into Cancer on this day at around 15h00 BST, adding to the stellium of planets in Cancer and possibly speeding up the baby’s arrival. However, Uranus and Mercury will square each other that day, which could put a spanner in the works, perhaps due to some kind of technological or communications problem, such as equipment malfunction.

Another possible date is the New Moon in Cancer on July the 8th, which reinforces the lunar symbolism associated with motherhood and childbirth – if I was to bet on a possible day for an early birth, it would be this one.  Two days afterwards, though, the Moon will ingress into Leo – the sign most associated with royalty, which also presents a good 2 day period for a royal birth.

On this day, Saturn in Scorpio will also go direct. Given that Saturn is also implicated in the major grand trine in water signs, and could act as a stabilising factor, this could be important.

Other key astrological factors to consider are the stationing of Uranus in Aries on the 17th, which could remove any nasty surprises from the scenario, such as complications during birth, and the return to direct motion of Mercury in Cancer, which might otherwise have indicated delays in delivery, or indeed, the arrival of Prince William at the hospital.

Of course, though, as Kate herself has been quoted as saying: “babies have their own agenda,”[v]  so it remains to be seen when the royal baby will arrive.

[i] ‘The Queen’s birthdays,’ Official website of the British Monarchy, http://www.royal.gov.uk/HMTheQueen/TheQueensbirthdays.aspx